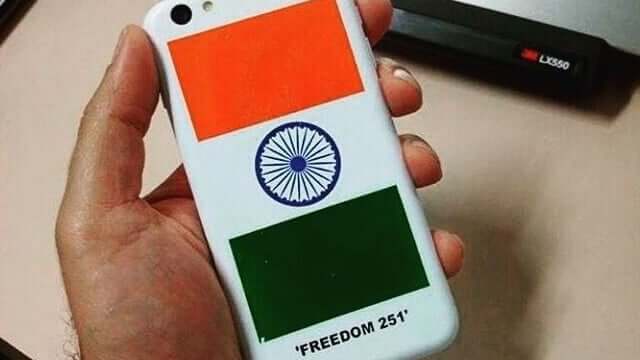 freedom 251 was a smartphone who offered a sale on promotion price at Rs. 251. It was marketed by a company “Ringing Bells Private Limited”.

It comes in, with a rumors that it will be the cheapest smartphone in the world. This scam happened in February 2016. First Kriti Somaiya has filed a complaint against Ringing Bells director Mohit Goel and its president Ashok Chaddha. The scammers gave a limited time booking between 18th of February 2016 to 21st of February 2016.

We Indian just believed this and ordered many phones but due to high traffic it’s software got crashed many times. Only those people feels save who ordered cash on delivery. Those people totally got scammed who paid online basis.

After so many of complains ringing Bells Company had promised to refund to 30,000 customers who pre-booked that phones. Later its director Goel and Sumit Kumar got arrested in February after Ghaziabad based Ayam Enterprises honor complained against frauded the company against Rs. 16 Lacs.

to Ringing Bells company through RTGS. Goel later claimed that he delivered worth Rs. 13 Lacs phone about to total number of 5000 Freedom 251 Smartphones to the Indian customers in July 2016. The company also declared that 65,000 smartphones they’ll delivered who ordered cash on delivery.

The 3G handset having features 4 inch display Qualcomm, 1.3 GHz quad core processor and 1 GB RAM according to the details shared by the company. This was first time in India sourced as the cheapest supply chain.

The Indian Cellular association (ICA) had said that its not appropriate for the senior political and government leadership to present the launch of “Freedom 251 Smartphone”. It was totally a controversy there is no involvement of Indian government in this scam and related to this matter.

ICA National president Mr. Pankaj Mohindroo had said that the freedom 251 smartphone at least cost Rs. 2700 and after addition of all taxes it cost Rs. 4100 then how it is possible to sold that phone at Rs. 251.

He also said if product had to planned to sold at lower margins the final price must be Rs. 3500-3800. He considered that they’ll see that case at the depth level.

Finally Goel had spent approximate six months in a jail because some of the customers filed case against him.

Note:- We got a lesson from this scam as actual price materials have a genuine buyer and supply chain. So never being fraudulent through this scammers and always keep a sense that if manufacturing cost having a phone is approximate Rs. 4000 then how is it possible you’ll get an android mobile smartphone in just Rs. 251.

Many scammers had comes many goes but this was one of the highest controversial matter happened in India which will always be remembered in India like a history. So just keep away from that kind of scammers and respect our Indian government who are active for their citizen that’s why Mr. Goel and their team got arrested.

Once again Mr. Goel flashed in a news that he got arrested again in June 2018 because the settling of rape case in Delhi. Goel had spent three months in a jail among this case and founded again a criminal.

2 thoughts on “Freedom 251: Do You Know The Scammers Collected a Huge Amount”