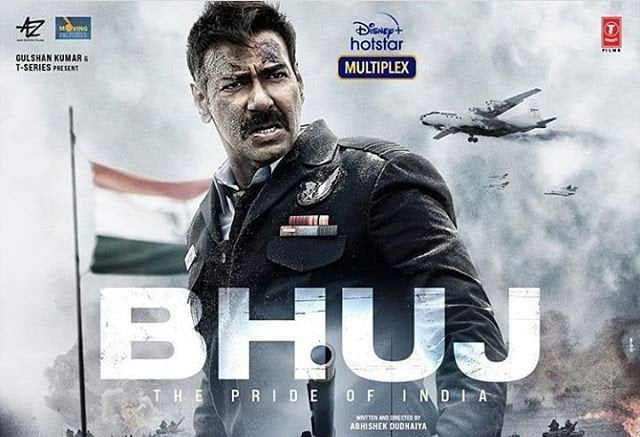 Next two months will be full of super duper blockbuster movies. Many new movies will released on Hotstar, but one of the best movies which is beyond imagination “Bhuj- The Pride of India”  starring with Sonakshi Sinha, Nora Fatehi, Ajay Devgan, Sanjay Dutt, Sharad Kelkarand Ammy Virk.

Abhishek Dudhaiya is the director of “Bhuj”, who knows for his precious capability for some television Series that is “Agneepath, Sindoor Tere Naam Ka, Ehsaas and Life ka Recharge”.

Movie produced by producers that are Bhushan Kumar who is a managing director of (T-Series), Ginny Khanuja, Krishan Kumar, Abhishek Dudhaiya, Kumar Mangat and Pathak.

Vishal-Shekhar gives music in “Bhuj” that is an upcoming Indian Hindi Language movie based on war, drama and action. This movie was to come very early on 29 June, 2020 in Cinema Theatres.

Movie was to released on theartre before Corona crisis, but due to this pandemic now movie will come within two months on OTT Platform that is Disney + Hotstar.

This movie is based on real story as during 1971, the war of India and Pakistan the Gujrati Women has helped Indian Air force. This story is based on a real war where Ajay Devgan will played a role of Squadron Leader Vijay Karnik, Sanjay Dutt as Indian Army Scout Ranchordas PAgi, Sonakshi Sinha as Sunderben Jetha Madharparya, Nora Fatehi as Spy Heena Rehman, Sharad kelkar as Military Officer Raghuvir Raina and Ammy Virk as Laxman Karnik.

Shooting Locations: Filming for “Bhuj- The Pride of India”

This movie had started their shooting on June 29, 2020, in many more locations that are Hyderabad, Bhopal, Indore, Kolkata, Lucknow, Gujarat and Mumbai.

This will must be a blockbuster movie because all roles played by superstars so its an award winning movie and must touched all Indian hearts.